The requested block type of 'utility-block' does not exist. Please re-activate the block plugin or child theme if you wish to use this block again.

What is happening at the aHUS Expert Centre?

The National Renal Complement Therapeutics Centre has been up and running for over a year now. It has moved into premises in the Old Children’s Building on the Royal Victoria Infirmary site in Newcastle upon Tyne.

Led by, the now ,Professor David Kavanagh ,the team has reached full complement to tackle Complement in renal disease, and not just aHUS.

Answers for aHUS has heard about what has been happening, and what is about to happen at the Centre.

Firstly after a year of operating  David Kavanagh is keen to establish a “Patients Panel” of 10 or 12 people from around the UK who have had experience of the service provided by the Centre . A meeting at the Centre is being planned in late September to bring together volunteers to join the panel and represent views of patients from each of the Regions. If any reader is interested to know more about participating in the panel let Answers know by e mailing secretary@ahusuk.org, or contact the Expert Centre directly.

New patient cards to replace the aHUSUK Card  have been designed and  ready to be distributed to patients and families. In the past five years around 2000 aHUSUK cards have been given out to cover all those in families in the UK affected by aHUS. It is estimated that there are  over 50 such families!

Similarly the Centre’s website has been designed and produced and is ready to go live. The website has pages to answer questions for patients; as well as for clinicians and includes a portal for emergency contact. In time it will be linked to the existing Rare Disease Group for aHUS pages on the Rare Renal website ,which is where diagnosis and treatment protocols for aHUS currently reside.

The Centre has conference facilities,hosts seminars and symposiums and receives visitors from the UK and abroad. The featured image is of a recent aHUS Nurses Day, which involved nurses from around the UK who have contact with aHUS patients. 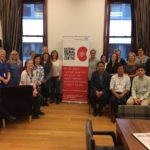 There are plans to hold “road show” meeting in the Regions to bring together patients to learn more about their illness and its treatment including the part played by the aHUS Expert Centre at the National Renal Complement Therapeutics Centre.

All this together with news shortly about the imminent start of the Withdrawal from Eculizumab study illustrates that a lot is happening for aHUS patients in the UK, and  with more to follow at the aHUS Expert Centre. aHUS is an awful rare disease as we know only too well;but in the UK we are now well served by our NHS and are more fortunate than many with rare diseases and others with aHUS around the world.